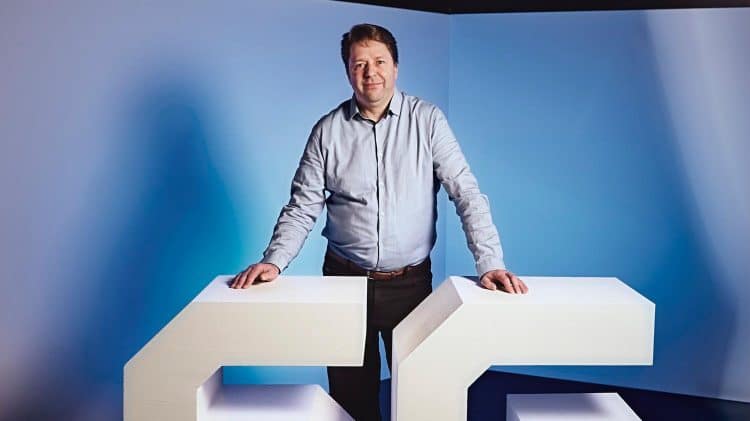 Academy Professor Matti Latva-aho is now known as the head of 6G Flagship, and is the international face of 6G research that stems from Oulu and Finland. Not shying away from ‘impossible’ things, Latva-aho has always taken on challenges more formidable than the one before throughout his career. ”I have never tried to take the easy way out, that’s just who I am”, says Latva-aho, and that is surely one of the traits needed in a man who’s in charge of a spearheading effort in next-generation research in telecommunications.

”This is too difficult for you.”

”Oh yeah?” thought Matti Latva-aho, then in his twenties and enjoying his internship with a major Finnish telecommunications company (you know the one.) The thing in question was designing telecommunications systems, and the man who made this judgment call about Latva-aho was his supervisor. ”Well, us folk from the North are often so pölijä [stupid], that if we’re told something is impossible, we will absolutely do it”, Latva-aho says.

Latva-aho began his studies in the University of Oulu and enrolled in electronics and communications engineering in 1987. The early 1990’s was the time of great economical recession in Finland and internships were very few and far between. Latva-aho was lucky to get one, and this led to a stint in Nokia Mobile Phones, which was the cell phone arm of the company at that time. Latva-aho originally planned a career in industry, but fate would have it otherwise. He realized that his skills were not enough for what was needed in the work, so he enrolled into additional courses and took on advanced studies at the University, with no intention of getting a degree–just the skills.

Latva-aho was fascinated by research and the certain freedom–as well as responsibility–that’s a part of the researcher life.

”You really make your own luck as a researcher. If you’re active and keep your eyes and ears open and are willing to embrace new possibilities, you get to have a very interesting work life. Working for a company is different: you are working toward the goals of the company, which is of course important, but there are so many avenues for someone who is making qulity research”, Latva-aho says.

Latva-aho has been deeply immersed in the world of radio technology and mobile telecommunications for decades now, and is a veteran of all the ”G’s”, leading up to 6G. As a researcher, he says he was always driven by the desire to solve practical problems as opposed to pure theoretical research.

”For me, theory is another tool in the toolbox. I have always wanted to solve problems that are relevant to everyday or practical life. This has been my guiding principle from the very early days of my career. My then-boss was right in the sense that designing telecommunications systems requires vast knowledge from so many disciplines, and theory for theory’s sake was never my strong suit. I like to push things forward”, Latva-aho says.

An ambitious researcher, he says one of his most significant personal achievements was when he finished his doctoral thesis, in 1998. He says it was a long time coming and he doubted many times if he would be able to finish the thesis and get his doctorate. In the end, his work paid off, and he was awarded the Best doctoral thesis prize of technical sciences in Finland.

After finishing his thesis, Latva-aho was again at a crossroads between academia and the industry. He was actually thinking about going back to Nokia, being a freshly minted doctor. The time was late 1990’s, the heyday of the mobile industry boom in Finland and internationally. At the University of Oulu, things were looking a little troubling as far as telecommunications research was concerned.

The Centre for Wireless Communications (CWC) at the university was facing a choice: close shop for good, or create a new beginning. This meant that Latva-aho would be soon facing a choice of his own.

”The head of CWC at the time went to work in the industry, as many others from CWC had done. The companies were recruiting researchers very aggressively and the industry was really pulling all the resources from universities at the time, because of their needs. So, something had to be done with the CWC, and they asked me to run it after I had finished my thesis”, Latva-aho says.

Never turning his back on a challenge, Latva-aho said yes.

The dearth of human resources at CWC meant that Latva-aho had to start recruiting researchers from abroad, and this began in 1998 and 1999. The consistent effort to take the CWC truly international worked, and today the CWC is a diverse community of just under 200 people working at the unit.

”The CWC is the rare research group that has stayed strong and managed to grow into such a formidable research muscle for the University, even by global standards. The secret to this is that we have been able to maintain our focus in research. All of the CWC achievements have happened because we have been working as a team. The core people have stayed in the group, which is rare. Usually in research groups people are taking off on their side projects, launching start-ups, doing their own thing, but here it really is a team effort. And that is a testament to the nature of the CWC and the community that we are”, Latva-aho says.

Even if Latva-aho has been the spokesperson for many things in his career, finding himself in the spotlight, he is adamant about seeing his achievements as communal endeavors. It’s always ”us” who did it, who achieved it. In fact, he is hard-pressed to tout his own horn and will concede that the Academy Professor and being named the director of 6G Flagship were high achievements for him, personally. But, he is quick to point out that the Flagship is ”the crown jewel of us working together for a common goal.”

The seismic change of 6G Flagship

Before 6G Flagship,  Latva-aho had been considering his options in terms of his work. He had purposefully been taking a back seat and was thinking about how to make the most of his Academy Professorship. Maybe he would be go abroad for a longer time? Maybe he would ease up his busy schedule? Maybe he could take his time in deciding what to do next? Then he received the news that would jolt the entire University.

”We felt euphoric. We couldn’t believe that we had been selected. That this amount of funding was secured. The first few months were a blur to us all, it was very unreal. It was very joyful, of course, but a huge change at the same time,” Latva-aho reminisces.

Everybody sprang into action. Plans were made by the week. How to ramp up this huge research effort, how to communicate about it, how to get international exposure.

”We rolled up our sleeves and went to work. We wanted to get everything up and running first and foremost and build up our international reach and scope during the second year of operation. Then, the U.S. President tweeted about 6G and Oulu and there we were, thrust in the spotlight. Things accelerated from there”, Latva-aho says.

While everything was growing exponentially, the speed of things also took its toll eventually. Latva-aho found himself traveling all over the world at a hectic pace, hitting conferences, networking, setting up collaborations, bridging academia and industry. Suddenly, Oulu was one of the epicenters of 6G research, and Latva-aho was in high demand.

”I’ve never been afraid of work, and this opportunity energized me. I was really excited but eventually I also felt exhausted and suffocated. The workload was too much. But we have an incredibly wonderful team of people, and we share responsibilities and the workload. It’s all of us driving this forward”, Latva-aho muses.

What’s in store for the future?

The exceptional circumstances that have defined this year have impacted 6G Flagship like the entire world. Everybody has been working remotely and the second 6G Summit was held virtually, a change in plans that happened in a matter of weeks, if not days. Travel days dropped to zero for Latva-aho, which is something he welcomes. This means more chances to re-energize in nature, which is very important for him. He has been an avid fisherman since childhood, and he often wakes up early in the morning to check the nets before getting to work. In the winter he likes to ski cross-country, and he says he has worked out many work-related problems while in the woods, listening to nature, observing the animals.

A well-balanced life leads to an ability to focus clearly. Latva-aho is as ambitious as ever and still not one to take the easy way out. There are new and exciting things happening at the Flagship and the momentum is not only maintained but gained. But all the while he is keeping an eye on the future.

”I told the core team at the Flagship that, look, by the end of the program we have to have the next generation of professors ready to take on the responsibility. We will have to be in a situation where they will take the torch and kick us old-timers out. And from what I can see now, things are looking very good”, Latva-aho says.